Unit 36: From Alchemy to Chemistry

History Lecture for Unit 36: The Origins of Modern Chemistry

The Development of Theories of Matter

We start our review of the history of science since the seventeenth century with the study of matter: what is it? What common characteristics does all matter share? What characteristics differentiate one type of matter from another? Are there certain basic types of matter that can be combined to form all the types of known matter? How does matter change form and combinations?

You may remember some of these characteristics of matter from our studies in Natural Science One (use the buttons to click through the slides of properties of matter):

For much of the medieval and early Renaissance periods, the classification of matter by the European scientists remained firmly rooted in the Aristotelian tradition of earth, fire, air and water. Throughout the middle ages, alchemists tried to identify which combinations of these four elements made up different kinds of matter like wood, iron, gold, and silver. They were especially interested in producing precious metals.

The same spirit of scientific revolution that resulted in Copernicus' heliocentric theory and Vesalius' new ideas about human anatomy also created challenges to the traditional division of matter into four elements. During the Renaissance, most of the new theories still rested on the assumption that only a few elements were necessary to account for all the different kinds of matter. But Robert Hooke's investigations in the seventeenth century and the search for the element of fire in the eighteenth eventually led to the realization that many elements were necessary to account for all the combinations of matter. In the early sixteenth century, a German alchemist by the name of Philippus Aureolus Theophrastus Bombastus von Hohenheim condemned the approach of Galen and Aristotle toward both matter and medicine. Writing under the name of Paracelsus, he proposed that inorganic chemical compounds should replace many of the organic and herbal remedies used for treating disease. He tried to create a new systematic division of matter using salt, mercury, and sulfur as the basic elements in place of earth, fire, water, and air, but he still mapped their properties to the ideas of heat and cold, wet and dry which had defined the Aristotelian elements.

Most of Paracelsus' works were published after his death, and his followers were often considered crackpots by their contemporaries and by the medical doctors, who preferred their herbal treatments to Paracelsus' new medicine. But the idea of iatrochemistry (chemical studies to produce medicines) seemed like a good idea to a number of people.

Among those who disagreed with Paracelsus' conclusions but thought alchemy or chemical studies should produce knowledge in the service of medicine was the Flemish scientist Jan Baptist van Helmont. Like Paracelsus, van Helmont wanted to limit elements: he was radical enough to propose that all matter was a form of water and, in the case of living matter, some kind of organic force. But van Helmont was also a good observer, and he performed systematic experiments to test all of his theories. When he became convinced that he could not create air from water, he accepted it as a separate element. But he insisted that living matter was imbued throughout with some kind of spiritual or organic force, in contrast to theories of his contemporaries, Descartes and Newton, who claimed that the human body, except for the soul, could be explained in completely mechanical terms.

Another approach to the division of matter was proposed by a follower of Paracelsus, Franciscus de la Boë Sylvius, who taught at the University of Leyden in the last half of the seventeenth century. Sylvius thought matter could be divided into two opposing types, acids and alkalis. When combined, the two types of matter fought for awhile, then formed the neutral compound, water. He used as an example the common acid-base reaction between vinegar and baking soda. When the two are combined, the resulting solution fizzes violently for a short while, then settles down. Sylvius' theory was very popular, but could not account for a number of compounds which could not be clearly identified as acidic or basic.

During the seventeenth century, a number of philosophers resurrected the Epicurean theory of atoms or corpuscles (small particles of different shapes and sizes) to replace the idea of Aristotelian elements, but most of their arguments were based on logical considerations, not on experimentation. In 1661, the English scientist Robert Boyle published a work called The Skeptical Chemist. Like Galileo's Dialogue Concerning Two World Systems, The Skeptical Chymist is presented as an argument between different positions: the sceptic, an Aristotelian, an Paracelsian, and a neutral observer. It reads like the script for a stage play. Unlike Galileo's work, however, Boyle's is rambling and difficult to follow, and so was not as popular as Galileo's work.

Read the Prefatory Introduction the of Boyle's Skeptical Chymist in this digital version of the original book. Stop when you get to "PHYSIOLOGICAL CONSIDERATIONS".

Boyle's work did, however, carefully point out the shortcomings of Paracelsus three-element theory, van Helmont's water-only theory, and the acid-alkali theory. In place of the earlier limited-element theories, Boyle proposed that mater was made up of corpuscles which differed in shape, size, and natural motion. These differences accounted for the interaction of the different compounds and could be explained in purely mechanical terms without any reference to spiritual motivation or incorporeal substance.

Boyle's work was important for several reasons. His criticism of earlier alchemical systems was based on actual experimentation, and so were his own proposals. Before the publication of The Skeptical Chemist, the study of matter belonged to alchemy, which was not considered a respectable occupation for serious philosophers who considered alchemy akin to magic. Boyle's experiments and consideration of the mechanics of matter and its interaction placed the study of matter more firmly in the growing tradition of the physicists.

Boyle spent a lot of time investigating the properties of air. With the assistance of a young Oxford student, Robert Hooke (the same Robert Hooke who saw cork cells and fought Newton for recognition over his force theories), Boyle built an air pump and began to investigate how air and other substances interact. He placed birds, mice, and candles in his vacuum chamber, and determined that air was not an element, but contained a substance within it that was necessary to keep animals breathing, was consumed by fire, caused iron to rust, and copper to turn green. Although Boyle never identified oxygen as such, his air experiments inspired a number of other investigations into the nature of air and fire. 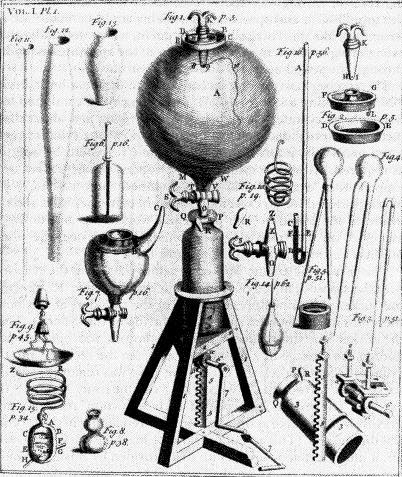 The Search for Phlogiston

Among those influenced to investigate the relationship between air and fire was Georg Stahl, who developed the phlogiston theory. Like Boyle, Stahl accepted the idea that matter was composed of corpuscles arranged in groups to form compounds. Stahl organized these corpuscles into three kinds of matter (fluid, oily, and fusible), plus water. Unlike the earlier Greek theorists, Paracelsus, and van Helmont, though, Stahl determined that not all bodies had to contain all four kinds of matter in combination. For example, not all bodies contained phlogiston; but those which did would burn in the atmosphere by ejecting phlogiston in flame or light. In the open air, such an object would burn until all its phlogiston was gone. In a closed container, however, the limited amount of air could hold only so much phlogiston, and once it became saturated, the object would cease to burn even if it still contained some phlogiston.

While this seems rather peculiar and even absurd to us, Stahl's theory had one important aspect which made it useful: one could burn objects and measure the changes to the burnt object (differences in weight) or to the air (differences in volume). More and more, investigators studying the properties of phlogiston used measurement and experimentation to gather data.

Joseph Black, a Scottish chemist, was actually a forerunner of Lavoisier. He was interested in the transformation of chalk into quicklime (CaO), a reaction which produced a gas, and the "slaking" of quicklime, in which water was absorbed by the quicklime. After many careful measurements, Black was able to show that the gas produced was not air. He called it "fixed air" (a gas we now identify as carbon dioxide). Black's 1756 publication of his results, Experiments upon Quicklime, demonstrated that there were gases other than air, a discovery which allowed Priestley and Lavoisier to realize that air itself might be composed of several gases, and ultimately to isolate oxygen from air.

Joseph Priestley a chemist and physicist and performed experiments on gases as well as studying electrical charged. Priestley isolated different "airs" or gases and then determined whether they would explode if sparked with an electrical charge, or support combustion. In April 1774, he isolated a colorless new gas by heating mercury oxide. He then burned a candle in the air successfully. But he was not able to dissolve this new gas in water in the same way that he had dissolved other gases. He called this new gas "dephlogisticated air." His publication on its properties were read with interest by the members of the Royal Society, and by the French chemist, Antoine Lavoisier.

Read the short presentation by Joseph Priestley on phlogiston theory.

Henry Cavendish was also a contemporary of Black, Priestley, and Lavoisier. Cavendish was interested in many things (he determined the value of G, the gravitational constant), but among chemists he is remembered for his discovery of "inflammable air", hydrogen, and a demonstration that inflammable air plus dephlogisticated air (oxygen) will produce water. Cavendish also spent much of his time determining the weights of equal volumes of gases. Later, when it was possible to determine that equal volumes of gases have equal numbers of molecules of the gas, Cavendish' data helped establish the ratios by which gases combine.

For example, hydrogen and oxygen (to use their modern names) combine in two volumes of hydrogen to one volume of oxygen to form water, but in 2 mass units of hydrogen to every 16 of oxygen. So by volume, the ratio is 2:1, but by weight it is 1:8. This means that a particle of hydrogen is 1/16 the weight of a particle of oxygen. By using this kind of analysis, chemists were able to determine the constitution of other compounds.

© 2005 - 2021 This course is offered through Scholars Online, a non-profit organization supporting classical Christian education through online courses. Permission to copy course content (lessons and labs) for personal study is granted to students currently or formerly enrolled in the course through Scholars Online. Reproduction for any other purpose, without the express written consent of the author, is prohibited.